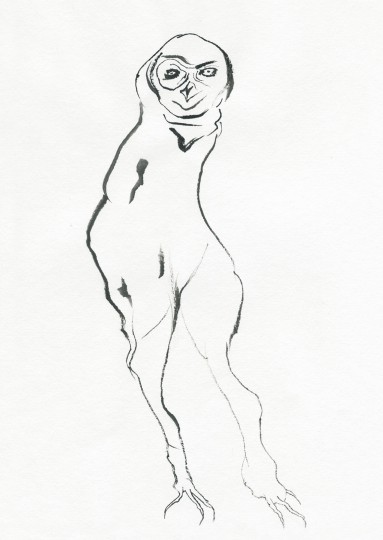 In the end of Febuary 2020 I had my last exhibition before lockdown times:

It happened to take place in a non-commercial independent art space in the city center of Munich, called “Weltraum”. The exhibition named “Fragile” unintendedly matched the situation. 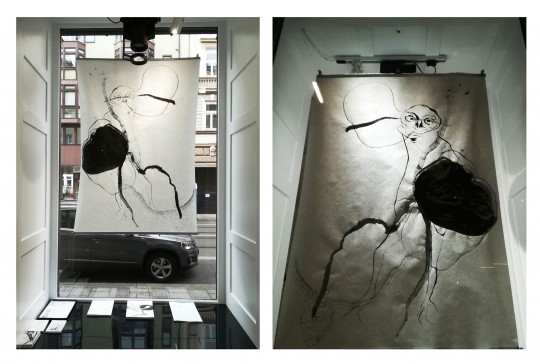 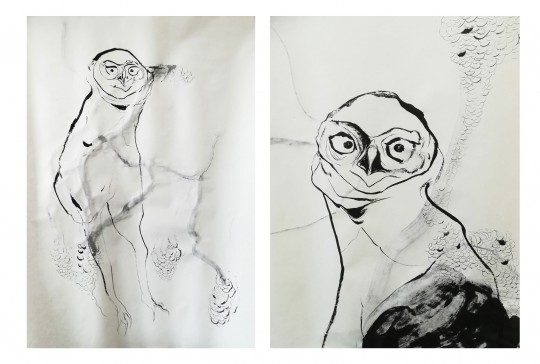 I showed current works from 2019/2020, connected to my artist in residency stay in Japan in 2019 – what seems quite far away from the perspective of now.

It was a quite strange to have an exhibition with the focus on traveling and intercultural experiences within an artist’s praxis at this point of time.

We provided disinfectant sprays and kept distance, nobody hugged or shook hands, people were tensed and everyone had realized, that the situation was serious, not somehow far away but really present. And that it was quite unsure when we could go somewhere abroad again, even within Europe. 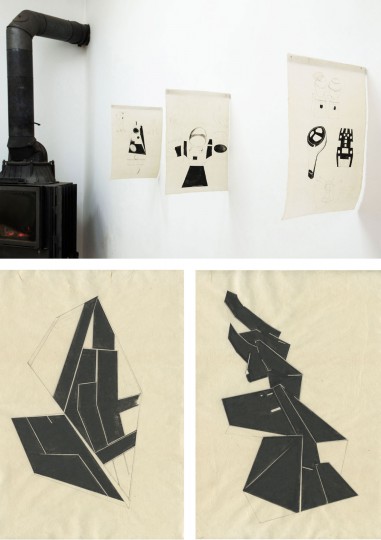 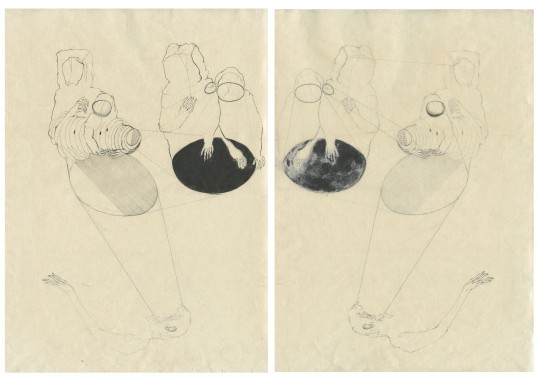 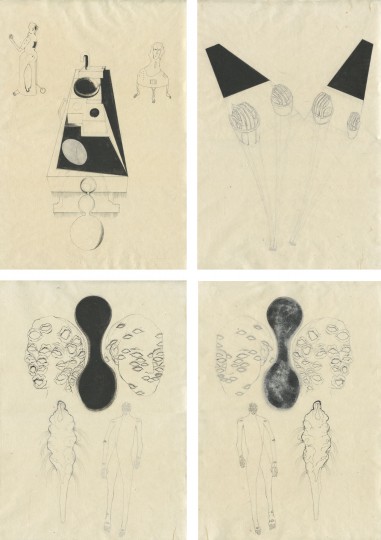 In the first room I showed drawings on 100 years old Japanese paper. I stayed at a really tiny village in the mountain area at the district of Niigata, with about 40 people living there, growing rice and vegetables and that artist in Residency place called “Yamakiwa Gallery and Art Hotel”, run by Yuri Fukushima, an artist who originally came from Tokyo. She had been given this really old paper and handed it to artists who came to her place for to live and work there for a month.

I developed a series of drawings, ink on paper, named “The other hand”. The paper is drawn on both sides. As it is semi-transparent, the parts of the drawing which are placed on the other side slightly shine through the surface of the paper.

There exist two slightly different versions of the drawing which can’t be seen at the same time and the reading direction of the image changes in the moment the paper is turned around.

For the show in Munich I developed an installation which both allowed the drawings to float like banners in the exhibition space and made the two sides visible. 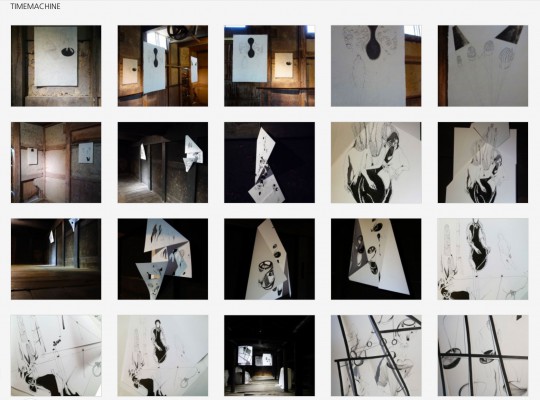 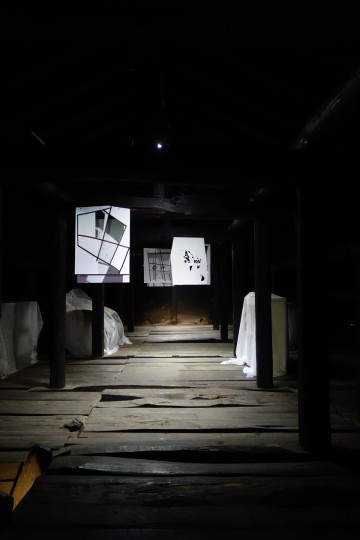 In the second room I showed a series of watercolor drawings and an almost 20 meters long drawing on Japanese paper, “Mutares”, which I installed with magnets on walls and the ceiling, so the drawing got a flowing ductus and formed a space within the space.

The drawing appears as a nonlinear narrative, a cascade of abstract and figurative motives combining Japanese techniques inspired by sumi-e drawings and my own visual language.

The figures are ambivalent shape shifters with animalistic and human traits, they are companions, like the daimones from antique times. Their expressions and actions seem contradictory: they could be dancing or fighting or could be sexually involved, they shift between good and bad, happiness and lonesomeness at the same time as well as between figuration and abstraction. The drawing is accompanied by small creatures made of paper clay placed on the drawing and on the floor. 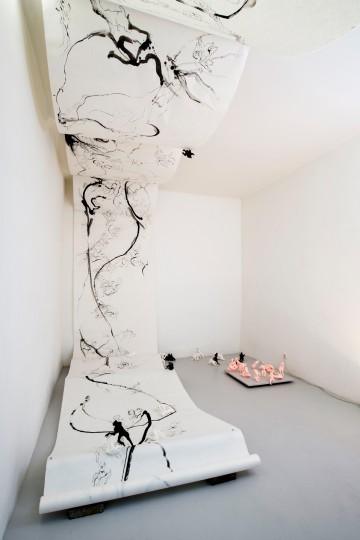 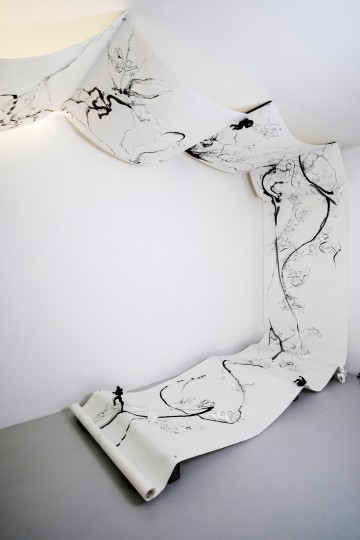 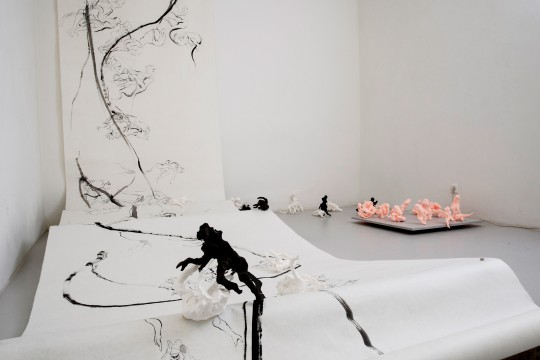 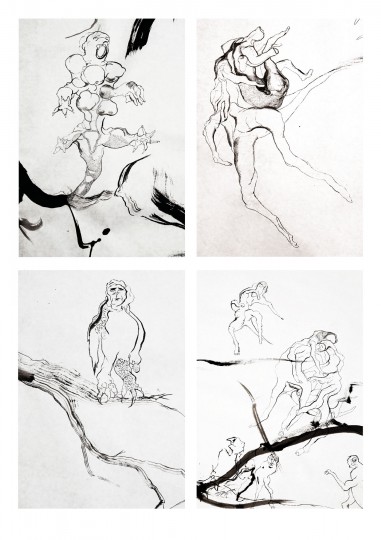 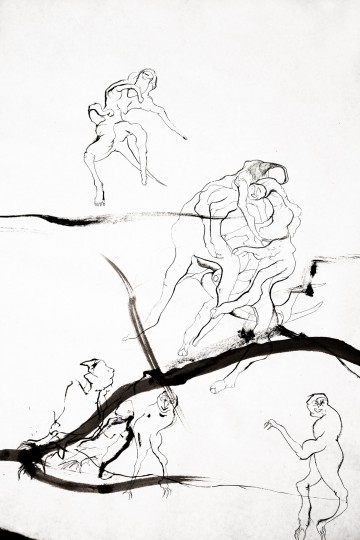 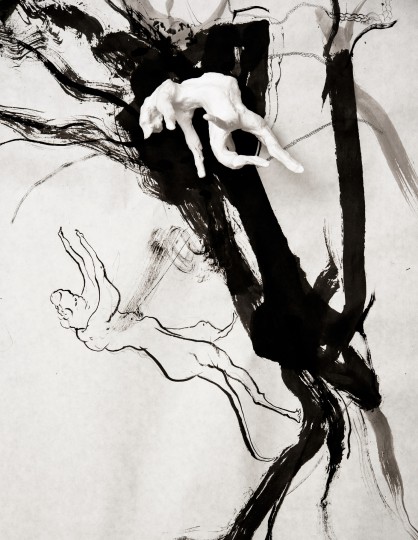 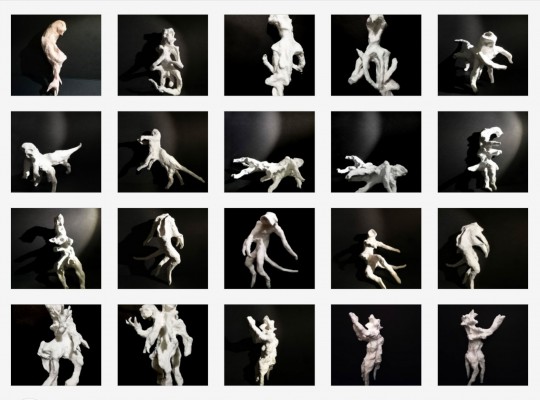